So now that we’re about a quarter of the way into the anime season, I thought I’d just share my opinion on series that I highly recommend to watch. If you’ve been following my posts in the past, then you should have a general idea of which series I found to be on top for the season.

Unbreakable Machine-Doll – I feel that Unbreakable Machine Doll is one of those series that combines many different aspects or types of anime into one series but manages to execute it very well. There are comedic moments, drama, battles, action, romance, and even some dark elements to it as well. It seems that battling with familiars is a common theme with the Fall 2013 season but I just feel that Unbreakable Machine-Doll offers the most captivating premise compared to the others supported by well designed characters (a MC who isn’t clueless and can take action)

Golden Time – If you are a fan of romance and somewhat light hearted or laid back series, I suggest picking this one up. I found it to be a bit refreshing compared to the typical romance anime since Golden Time has a college setting where the main cast are adults. I don’t think its particularly amazing yet, but I do think that if you are in the mood for a feel good anime, then this is one of them. With that said, Golden Time may show similarities to Toradora! (same authors) as the series progress and maybe we’ll see some intense drama and deeper character interactions.

Nagi no Asukara – This is probably one of the most visually stunning anime (no surprise from P.A. Works) from the Fall 2013 season and has a beautiful soundtrack to go along with it. At first glance it just seems like your generic high school drama with love triangles and what not. However, Nagi no Asukara also manages to excel at setting up the world and hopefully will explore the implications and potential resolutions of having the sea people and land people coexisting with each other.

Ore no Nounai Sentakushi ga, Gakuen Love Comedy wo Zenryoku de Jama Shiteiru (NouCome) – There isn’t too much to say about this series besides it is absolutely ridiculous. If you enjoy slapstick humour then I highly recommend giving this series a shot. To add my personal opinion about the show, I found that the voice acting in this series is very well done and enhances the show’s presentation. Many of the voice actresses are new in the industry but within these 4 episodes alone, they have shown great ranges they are capable of with their voice as well as having some unique voices which I wouldn’t mind seeing more of in the future.

Samurai Flamenco – This is kind of like Kick-Ass but in anime format, and much less violent. While it may not be the most exciting thing to watch a regular guy try and stop petty crimes, it is nice to see possible implications of what happens when rules are 100% enforced or when they aren’t. The main character is also very charismatic in the sense that you just can’t hate his idealistic view on the world. 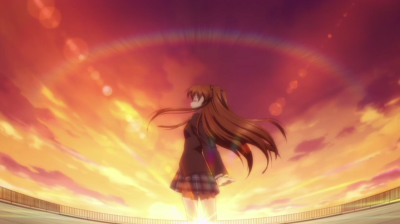 White Album 2 – You don’t need to watch the previous series to watch this one since it features different characters and a different story. White Album 2 has, in my opinion, some of the best character designs in the Fall 2013 season. The characters they created are very realistic and normal people who behave rationally. This is not your typical romance or harem series, and feelings or messages are told through well scripted dialogue and body language of the characters. The music in this series is also very calm and relaxing and ties into the show very well.

These anime were the ones I felt stood out the most to me and would highly recommend to almost anyone, who hasn’t already, to pick them up.I know there are a lot of other really popular and great shows currently airing (Kill la Kill, Tokyo Ravens, etc) but these are the ones that I found to be really solid and stood out the most.

You can find my thoughts on other series in my weekly Thoughts and Impressions posts: